Examples of Our Work

We are very excited to announce that our company has been selected for the Extreme Business Makeover offered by the Center for Innovation and Leadership at the WNEC Law School!! There will be several expert panelists in the fields of law, accounting, marketing, and finance who will critique the actual business plan and offer advice on operations, marketing, legal matters, profitability, and much more to help us take our business to the next level! We feel very fortunate to be offered this opportunity!

This event will take place on Wednesday, June 19th from 12:00-1:30PM at the Western New England School of Law, 1215 Wilbraham Road in Springfield, MA. Lunch will be served. This is an event FREE and OPEN TO THE PUBLIC so please come enjoy the words of wisdom from some great experts!  If you are self-employed, there's even more reason for you to join us as you will be able to apply what you learn to your own business.

Our business is growing and we are thrilled to be adding a valuable person to our team of employees!

Andrew has been hired as a carpenter and will be helping Jason and our other employee Dave, with all of our general carpentry and handicap remodeling projects.

Jason was recently elected to the position of Vice-President for the Pioneer Valley Chapter of BNI (Business Network International), the largest referral organization in the world!

BNI provides a positive, supportive, and structured environment for the development and exchange of quality business referrals. It does so by helping you build personal relationships with dozens of other qualified business professionals.

If you would like to meet the group of business professionals that Jason works with on a regular basis and start developing relationships that can help grow your business, contact him for an invitation. 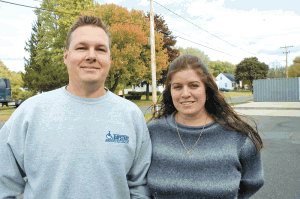 “Accidents happen all the time,” Jason Harris said. And sometimes, they cause life changes that echo far beyond the injury itself.

Specifically, many injuries require not only a period of rehabilitation care to return to function, but also changes to the home — from safety grab bars to wheelchair ramps — to ease the transition back to good health.

“When you get in an accident, we offer everything from temporary solutions to permanent ones, and we’re prepared to make those changes according as each person’s situation demands,” said Harris, founder and lead carpenter of Baystate Accessibility Remodelers, a Montgomery-based general contractor that specializes in remodeling homes for safety and, as the name suggests, access. “When people get to a certain point in rehab where they’re starting to improve and might be ready to go back home, that’s when the wheels start turning.”

But it’s not just people recovering from injury, or living with the permanent effects of an accident. As the aging population increases, many seniors who can get around reasonably well are turning to home modifications as a way to stay in their homes longer.

“We’re a remodeling company specializing in creating safe and accessible homes,” Harris said. “Our target market is anybody who is in a position of having had an injury or disease or Baby Boomers who are looking to have their house age with them, and need their homes customized so they can remain there. We also help younger people or families with a child with a disability, who need to modify their home so they don’t have to look for, say, a single-story living space.”

It’s a growing niche in building, said Harris, who started Baystate Hardware & Accessories (of which Baystate Accessibility Remodelers is a division) in 2003; his wife, Cindy, later came on board as president.

Even though many people in these situations might first think of asking a friend or family member who’s handy with tools to make safety modifications, the couple says it’s better to hire professionals who understand not only construction and remodeling, but also the specific needs of aging or recovering homeowners. Specifically, Jason has been designated a Certified Aging in Place Specialist by the American Assoc. of Retired Persons and the National Homebuilders Assoc.

“We want to show the general public that there are people out there who are specialists in the field, who are doing the continuing education and understand these trends, and that really separates us from our competition,” he told BusinessWest. “You could go to a remodeling company and tell them what you need, or you can have those services performed with us and get the benefit of dealing with an expert who knows what those modifications are. We come to the table already being a solution to their problems.”

Harris’ background is in carpentry, having graduated from Smith Vocational High School in Northampton in 1991. And when he considered starting his own company, he saw an opportunity in an emerging trend much talked-about in health care: the aging of the population. About 80 million Baby Boomers have either retired or are preparing to enter the ranks of retirees, and the percentage of Americans over age 85 is rising faster than any other group.

“Knowing that the average age in the country was increasing, and with the increasing costs of institutionalized living continuing to go up, we understood that modifying an existing home gives someone the ability to stay home, and for considerably less money, rather than have their freedoms stripped away,” he said.

“We also get a lot of people with injuries coming out of short-term rehabilitation facilities,” he added, noting that the company gets referrals from most such centers in the area, including Heritage Hall, Noble Hospital, and Weldon Rehabilitation Hospital at Mercy Medical Center. Those clients dispel the idea that Baystate’s services are only for the elderly.

“You can be 30 years old and fall and sustain a broken hip,” Cindy said. “This can be a temporary solution for a situation like that, as well as for a child with spinal problems who’s in a wheelchair. It’s for anybody, whether they’re dealing with disease, short-term injury, or a long-term issue.”

The modifications run the gamut, they explained, from bathroom fixes such as grab bars, modified toilet heights, and walk-in showers to widening doorways and building ramps and chair lifts for people using wheelchairs, all the way up to completely remodeling kitchens for wheelchair accessibility or building additions for in-law apartments so an older person can move back in with their children.

“This is a real specialty; we’re not just trying to be a niche market by virtue of sheer marketing,” Jason said. “We have specialized training and education to do this.”

And what clients need, they said, is someone not only certified to make these types of changes, but also trained to perform home assessments to determine exactly what modifications are necessary, training which Jason has also undergone. “They get a road map to look at. Are they worried about their eyesight? Can they go up and down stairs? Maybe they need a better first-floor bathroom with laundry. We get people to think about these things.”

Some customers — not as many as they would like — treat these changes as what Jason calls “preventative maintenance,” as an investment in anticipation of needing such modifications to age in place.

“Proactive customers will get an assessment and consider making changes to their home afterward,” Cindy added. “From the garage where they park the car to the bedroom they sleep in, we report on areas where they could work on improving.”

One goal, they told BusinessWest, is to get older people thinking about home-safety modifications before an accident — such as a hip fracture, which often leads to a rapid, irreversible decline in health — occurs, and skilled-nursing care is the only option remaining.

However, Jason and Cindy Harris say most customers call only when they need to make changes right away — at the start of a short-term rehab stay, for example, or when family members are suddenly faced with the possibility of moving a parent to assisted living and would rather not. Before that, Jason said, they don’t really think about it.

“We find that people are hesitant to make the changes, to spend the money on really making their lives easier,” he said.

“The ones who are healthy don’t want to plan for the future,” Cindy added. “Or they see this work as a limitation, when we see it as enabling them to stay in their home longer. People don’t want to think about aging; they think it’s not a graceful thing.”

Others, Jason said, are put off from making such changes by a perception that their home will take on an institutional look. “But these modifications can be done just as aesthetically pleasing as any other kind of modification. People have this idea of big, stainless-steel grab bars, but we have fully customizable grab bars in all colors, shapes, and sizes so that we can blend safety and accessibility without making their home look like a nursing facility. These modifications really help everyone and hurt no one.”

They’re also getting more notice by the construction industry overall, Jason said. “The trend in design toward accessible homes is kind of the next big thing, right behind the green-construction trend. People are realizing that the aging population is there.”

And only getting bigger.

What is CAPS you ask?  Well it’s not what you wear on your head, at least not what I am talking about here.

We are proud to be one of the very few carpentry remodeling companies in Western Massachusetts that has one or more Certified Aging in Place Specialists working within our company.

This certification involves three classes that go into great detail about the aging in place process and how we can accomodate our customers that would like to age in place. In order to stay certified, one must also attain C.E.U. or continuing education credits every two years.

To learn more about the Certified Aging In Place Specialist designation, head over to the National Association of Home Builders' website, where it explains the CAPS program.

Your homes’ egress is your link to the outside world and must be safe and accessible at all times whether you are coming or going. Egress involves all of your door systems, stairs and/or ramps that lead to the outdoor world.

A few things that you might need to look at would be the width of the door.  Is it wide enough to accomodate a wheelchair, if ever needed?  What about a walker?  Is the transition in and out of the house difficult?  Also, think of the future…will it be difficult down the road?  Are their handrails to assist you once you get outside, especially if there are steps?  Are the door(s) properly installed to make it easier to get into the home with a bagful of groceries or does, say, a screen door slam behind you and hit your ankle?  While that may sound like a silly thing to fix, it is actually very dangerous because it can throw your balance off rather quickly and you may end up falling.